Things I’ve learned today: make an empty room recording before piloting on people. Check if my experimental effects come out in the absence of a brain in the helmet. Then pilot.

I usually use brief, pure tones in my experiments, and I usually do MEG. There is a stimulus computer outside the MEG room, that plays the tones. These go to an amplifier, which connects to a filter, which sends a cable into the shielded room with the (Elekta) MEG system. This cable is connected to a transducer (in our case similar to the one on the image below), after which the sound travels (i.e. the air waves travel) via silicone tubes ending in insert earphones. 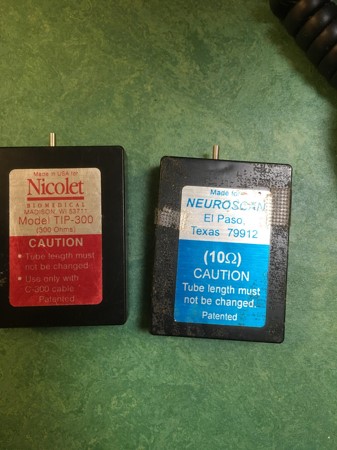 This is the first time that I wanted to use a tone lower than half of the sampling frequency of the data acquisition (which is 1000 Hz). I wanted to pick two tones that are as separable as possible in anatomical space, yet still within the range of high auditory sensitivity. My idea was to later try to decode the tones from neural activity. This means that it would be very, very unfortunate if any of the recorded signal specific to tone frequency comes from anywhere outside the brain. I picked 250 Hz and 2500 Hz, made them 50 ms long with 5 ms rise and fall times. The lower tone looks like this (x-axis is samples): 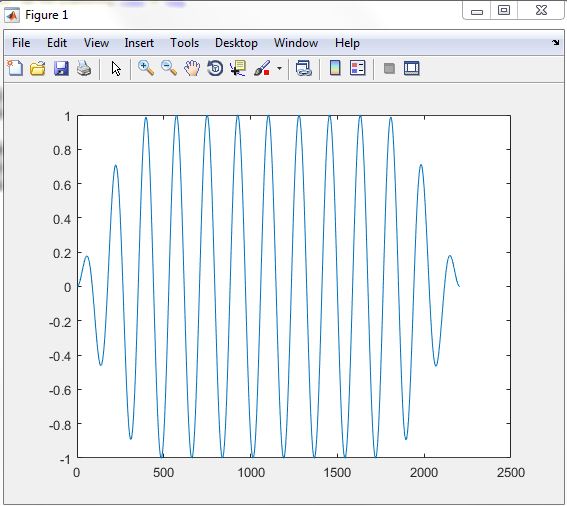 And what it did to the acquisition computer looked like this: 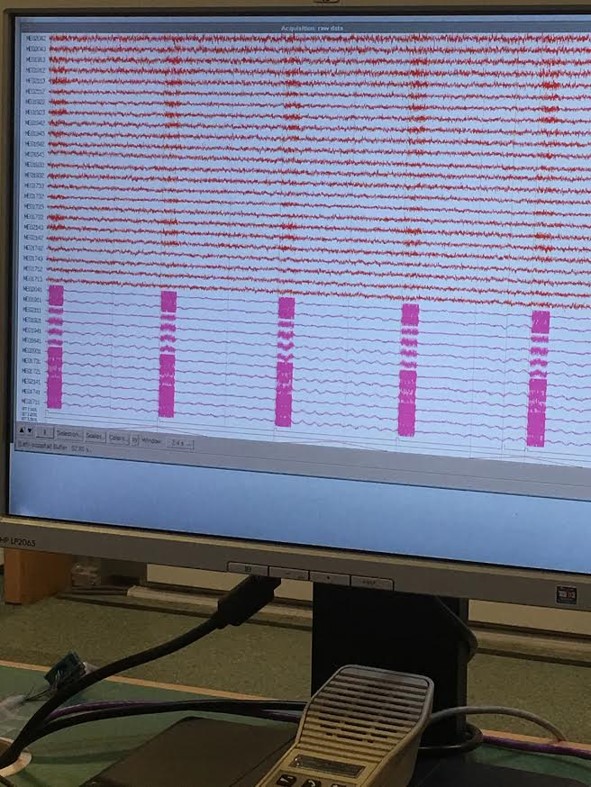 So, yesterday and today, Ryszard, Sven, Simone and I tried to figure out what is going on. Mostly we just looked at the acquisition monitor, played some tones, changed things around, played more tones. We recorded a bit. A couple of people asked me to share what we found, so here goes.

Here are a few empty room ‘ERFs’ sampled at 1000 Hz, from a single gradiometer (no planar transform), to tones of various low frequencies, an average of 20 each: 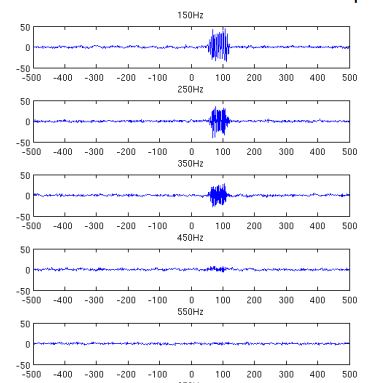 At first glance, the problem seemed to go away at higher tone frequencies. But alas, this was due to sampling rate. When we increased the sampling rate, we started seeing the artifact at higher frequencies as well. It’s hard to say whether all of the decrease in magnitude is related to the sampling, or if some of it is specific to the tones.

We also looked at individual trials. We found that the artifact is not precisely locked to tone onset, and not identical in shape from trial to trial. In other words, the artifact might disappear in the average of many trials, but would still be present in individual trails.

Weirdly, the onset of the artifact is delayed by about 70 ms from tone onset (which comes about 6-7 ms after the trigger: trigger-based tone onset is at zero here). We don’t know why.

Which channels were affected? Gradiometers above, magnetometers below: 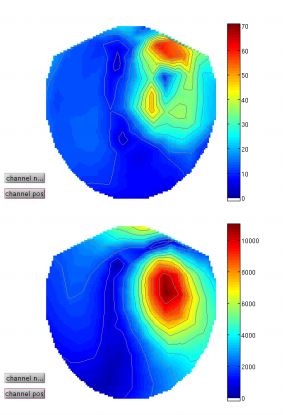 We next looked at the frequency content of the tones. Here’s a frequency decomposition of MEG activity to a 150 Hz and a 250 Hz tone: 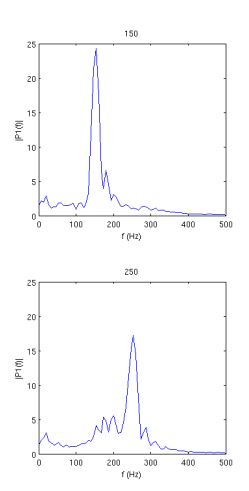 In other words, we see the frequency of the tone in the signal.

There was no change in topography – the same subset of right channels were affected.

So far, it could all be electronics. The frequency content of the tones can be directly present in the electrical signal (I am told), the volume increase could correspond to a voltage increase, and the moving of the transducer with no change in affected sensors also points to a purely electrical problem.

But then we did one other test – we put the transducer on a little table on the side, just standing there, instead of securing it to some surface with tape as we usually do. If the vibration of the transducer is not involved in the artifact, nothing should change in what we record.

The magnitude of the artifact went up by quite a bit when the transducer was loose.

We eventually zeroed in on a (we’re guessing) problem with the combination of amplifier, one of the cables between amplifier and filter, and the filter itself. Electric in origin. However, this electrical error seems to interact with the tone-specific vibrations in the transducer.

Our next step is to install a new sound system entirely outside the MEG room, and put only the silicone tubes inside – everything else, transducer included, stays out. We’ll be trying out those 150 Hz thumps again when it’s all set, and hopefully we won’t find them in the signal anymore.

Obviously, each lab has its own quirks and this particular technical issue might be unique to us. But just in case, I intend to add a quick empty room recording to my piloting from now on.

Curious to hear your thoughts.